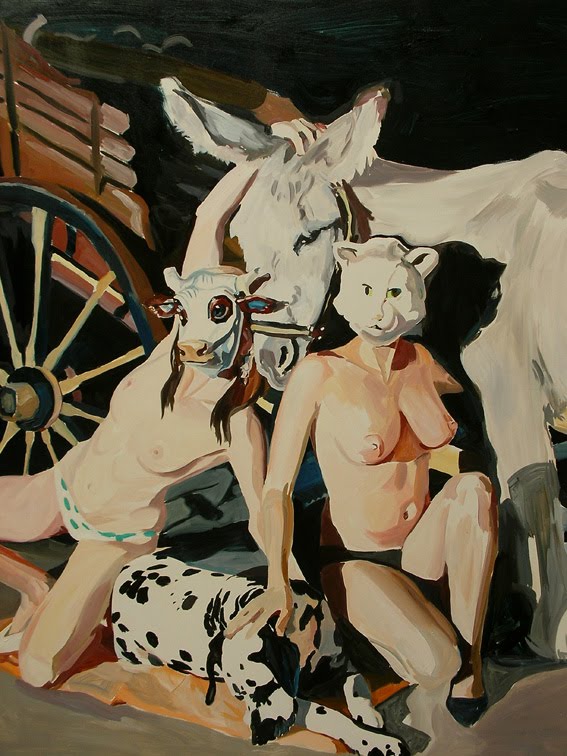 Welsh-born Elinor Evans, currently living and working in Spain, divides her time between Spain, Wales and London. In 2005 she completed her MA in Painting at the Royal College of Art, where in 2004 she won the Amlin Prize for the most promising Young artist. In Febuary 2006 she founded/exhibited and curated the Shaman Project, which like the nomads, is a moving, exhibition/event of music, art and performance. Following the great succes of the first show in Salamanca, Spain, she then continued on a larger scale inviting 14 artists to take part in the second Shaman Project in Bilbao, 2006. Where her performance whith a live horse was screaned

Evans has widly exhibited in Wales,Britan, and Europe. Selected for Art Review´s ten of the best B.A Graduates after completing at Chelsea College of Art in 2003, to then winning the Fine Art Award at the National Eisteddfod in Wales.

“Elinor Evans has a confidence of line and form that belie her years. There is a freshness in her work which has an unsettling undercurrent and echoes the American artist Eric Fischl”. Selector Ann F Jones.

In 2006 Evans won the prostgeous Young Wales VII Award held in the Royal Cambrian Academy, Conwy, after been selected to exhibit in previous years.

Recently Elinor was selected in second place as one of the Young Masters of Generation Y, Oil is Back written by Freire Barnes in Bon Magazine, 2007. “Evans is what we would call a “painter´s painter” producing canvases at a prolific rate.”

Naked behind the Mask explores further into the special relationship which she believes exists between animals and humans. In this new series of paintings and drawings Elinor Evans disrobes her human models, in poses inspired by the nude paintings of the great masters from the 18th-century, albeit with tongue in cheek. The caracters are laid bare in all their nakedness, but they are unable to rid themselves of the ubiquitous masks

Evans Sets these stylised scenes, which depict the relationship between the human body, hypocrisy and animals. They are then transposed from digital technology, film and video, in a rapid, enthusiastic application of oil, onto larger canvases. The effect is suprisingly tactile, with furry fabric and heavy furniture and a silky-looking dog.

Evans´s Dalmation dog, Picasso, is her latest muse and embodies the innocence and loyalty of animals. 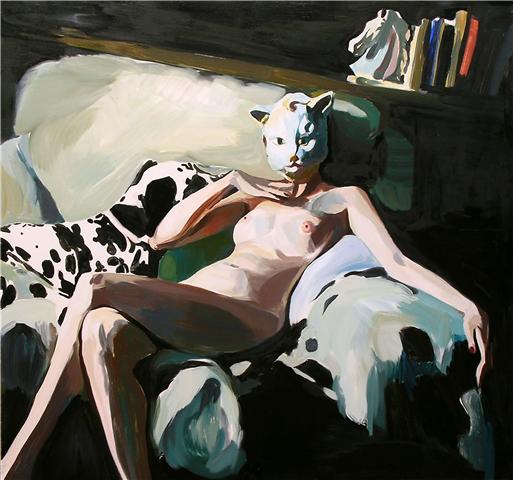 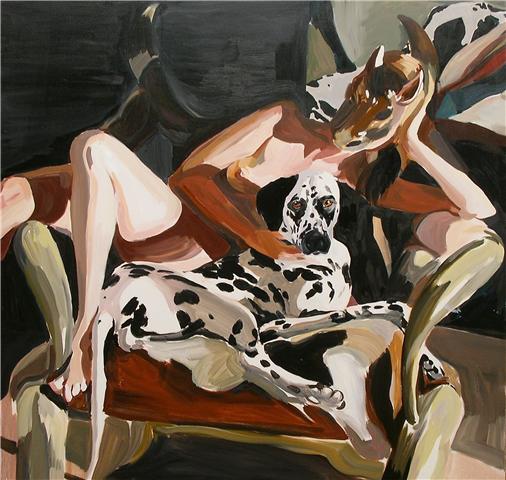 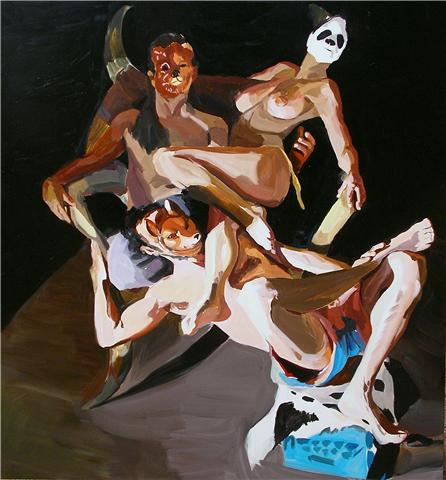 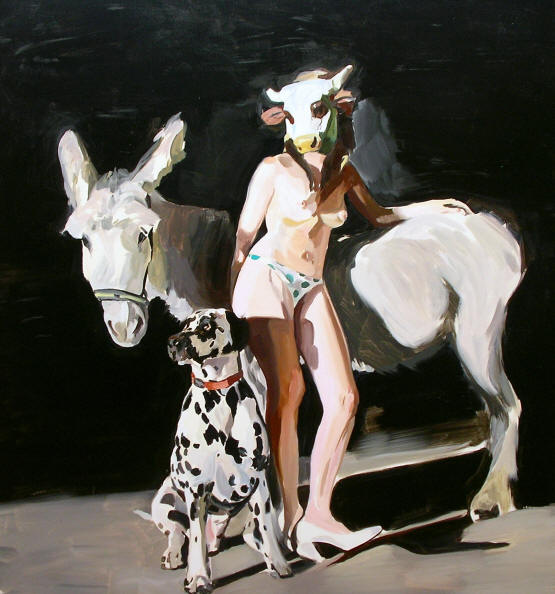 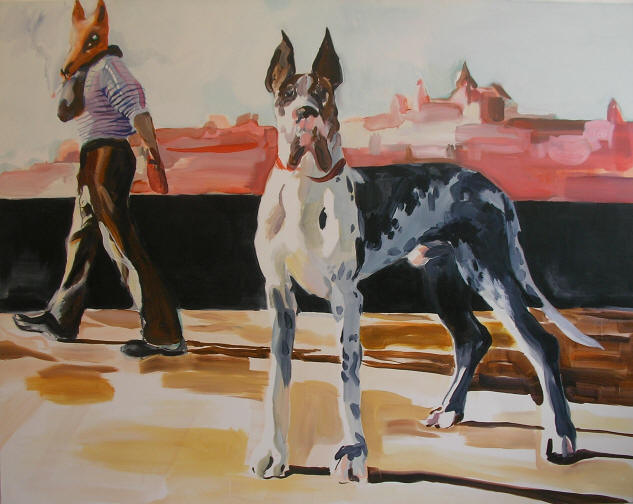 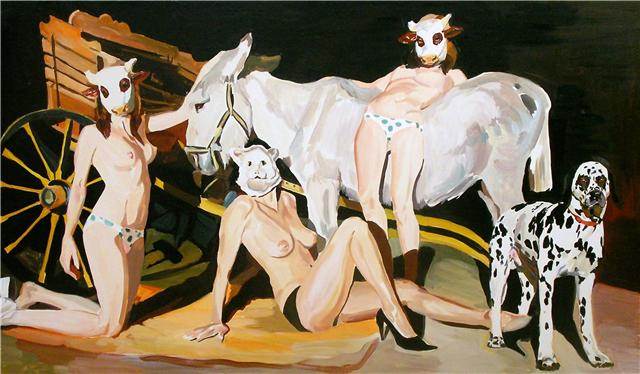 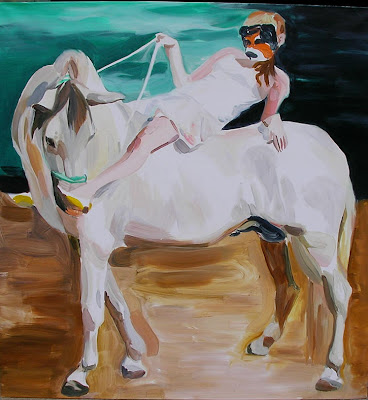 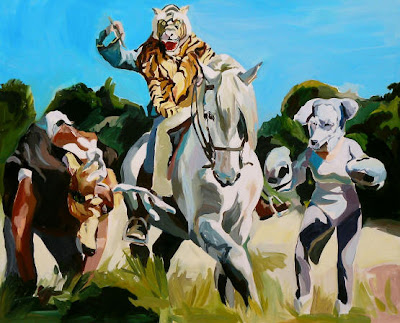 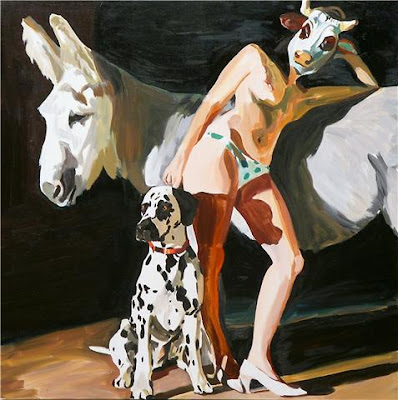 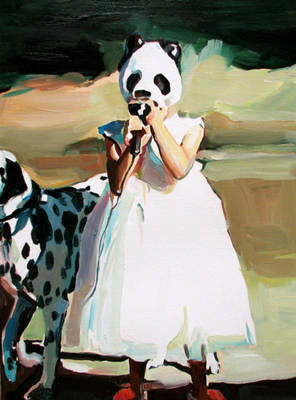 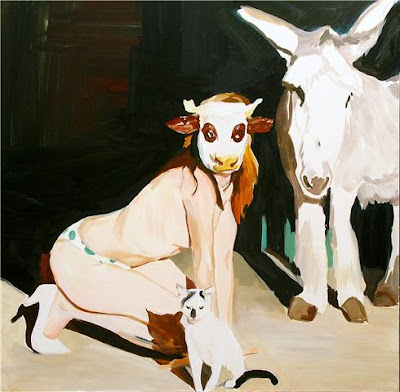