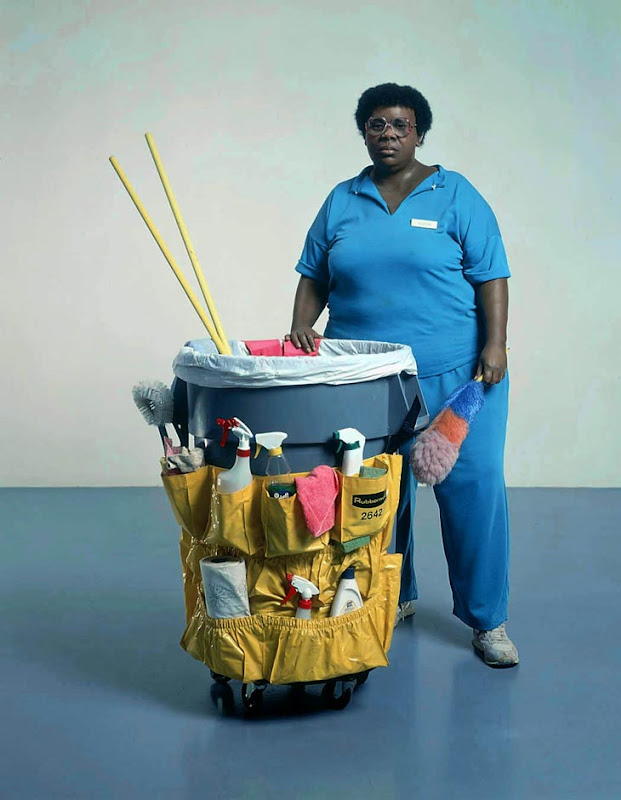 Duane Hanson (January 17, 1925–January 6, 1996) was an American artist based in South Florida, a sculptor known for his lifecast realistic works of people, cast in various materials, including polyester resin, fibreglass, Bondo and bronze. His work is often associated with the Pop Art movement, as well as hyperrealism


Duane Hanson was born January 17, 1925, in Alexandria, Minnesota. After attendance at Luther College and the University of Washington, he graduated from Macalaster College in 1946. Following a period teaching high school art, he received a Master of Fine Arts degree from the Cranbrook Academy of Art in Bloomfield Hills in 1951.

Around 1966 Hanson began making figural casts using fiberglass and vinyl. Works that first brought him notice were of figures grouped in tableaux, usually of brutal and violent subjects, somewhat similar to the work of Edward Keinholz. Hanson's Abortion (1966) was inspired by the horrors of a backroom procedure; Accident (1967) showed a motorcycle crash; and Race Riot (1969–1971) included among its seven figures a white policeman terrorizing an African American man as well as an African American rioter attacking the policeman. Other works which dealt with physical violence or other explosive social issues of the 1960s were Riot (1967), Football Players (1969), and Vietnam Scene (1969).

These works, cast from actual people, were made of fiberglass (polyester resin reinforced with fiberglass,) painted to make the revealed skin look realistic with veins and blemishes. Hanson then clothed the figures with garments from second-hand clothing stores and theatrically arranged the action. Clearly these works contained strong social comment and can be seen as modern parallels to the concerns of 19th-century French Realists such as Honore Daumier and Jean Francois Millet, artists Hanson admired.

Around 1970 Hanson abandoned such gut-wrenching subjects for more subtle though no less vivid ones. In that year he made the Supermarket Shopper, Hardhat, and Tourists; Woman Eating was completed in 1971. These were also life-sized, clothed, fiberglass figures. Unlike the earlier works, however, these were single or paired figures, not overtly in a violent activity. Furthermore, whereas the earlier works tended to be more contained spatially, the later figures had no boundaries from the viewer. They quite literally inhabited the viewer's space—with amusing results at times, as in the cases of Reading Man (1977) or the Photographer (1978). He sometimes cast his own children in his work, as in Cheerleader (1988), and Surfer (1987). Although detractors may liken his work to figures in a wax museum, the content of his sculptures is more complex and expressive than that normally found in waxworks. 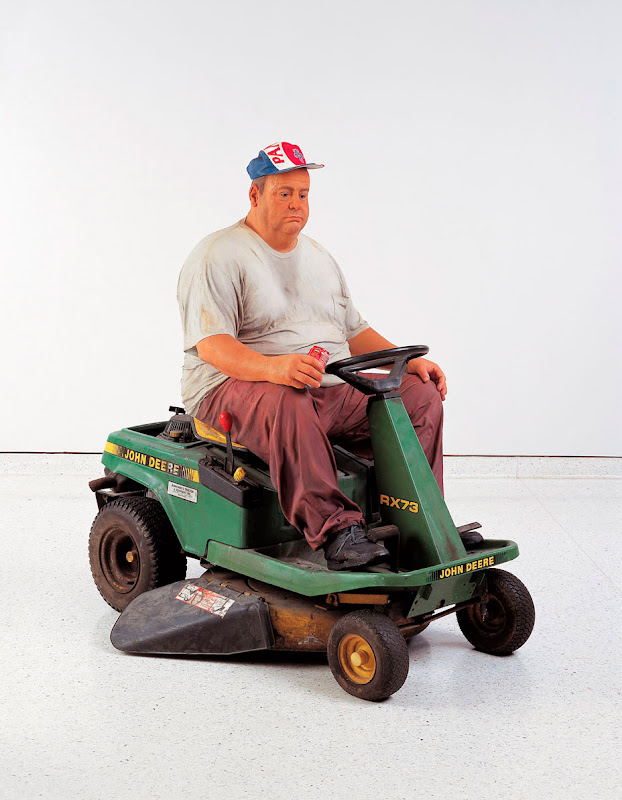 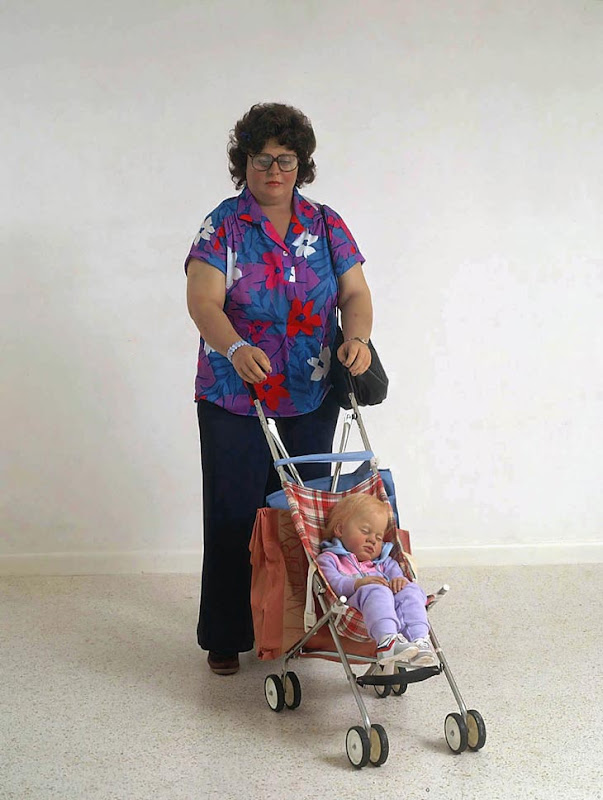 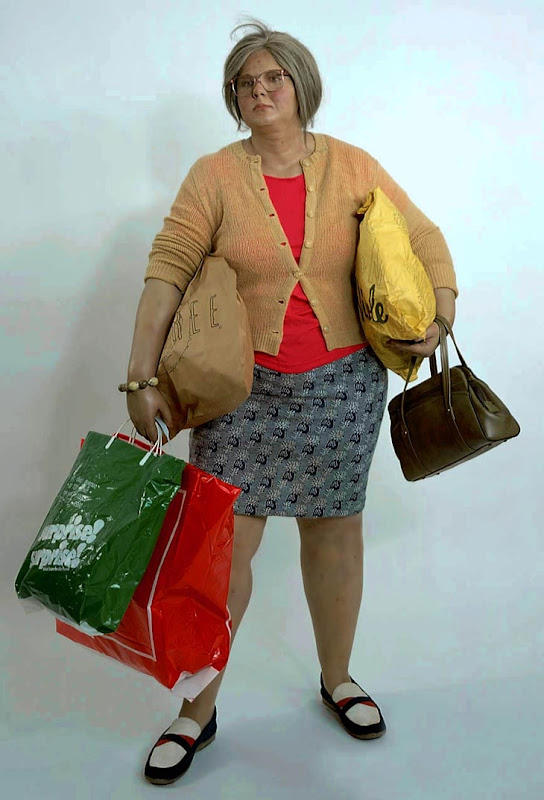 Since the early 1970’s Duane Hanson has been making startlingly lifelike sculptures of middle America accomplished through a complex process of casting from live models, recreated in bronze or fibreglass resin.

Duane Hanson concentrated on the naked fact of the subject, an astonishingly persuasive counterfeit of another human being as a fully realised physical presence. When describing this sculpture Duane Hanson said: ‘I like the physical burdens this woman carries. She is weighted down by all of her shopping bags and purchases, and she has become almost a bag herself. She carries physical burdens – the burdens of life, of everyday living. But initially, it’s quite a funny sculpture’.

Duane Hanson’s sculptures are like minutes from a slice of life, frozen for pause and contemplation. And unlike looking at real people you get the chance for an up-close, unblinking gawp.

Queenie can be understood on one level as the personification of all those resigned-looking women who drag their bodies around in pursuit of the mess created by the rest of us. But we are made to confront the fact that such women, who are usually invisible and ignored, are not just faceless domestics.

Duane Hanson’s sculptures of people are just too believable. Creating vignettes of real American life, he doesn’t forget a single detail. Casting his figures from live models in his studio, Duane Hanson then adorned them with every attribute of life-likeness from tiny body hairs, varicose viens, bruises, and hangnails. He hand picked their clothes from second hand shops, and accessorised them accordingly.


The truly radical nature of Duane Hanson’s procedures – by which casts were made directly from the body and head of a particular but anonymous person with exception of Jogger a doctor friend of Duane Hanson who volunteered for the mold-making sessions, and whose body type fit perfectly with his idea. Reassembled into a complete figure, ilusionistically painted for the most convincing skin-tones and finally dressed in actual clothes. Duane Hanson judged the success of his work insofar as it obscured all traces of his subtle interventions so the figure appeared to be nothing more than a three dimensional replica of an actual person. 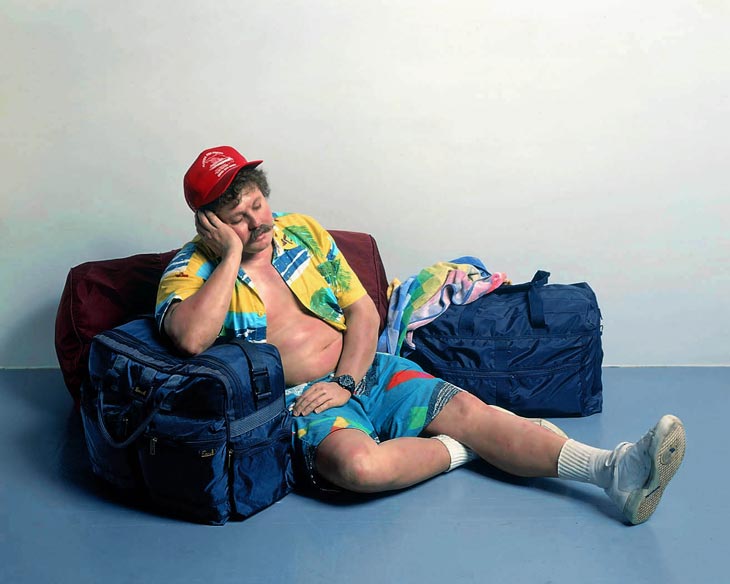