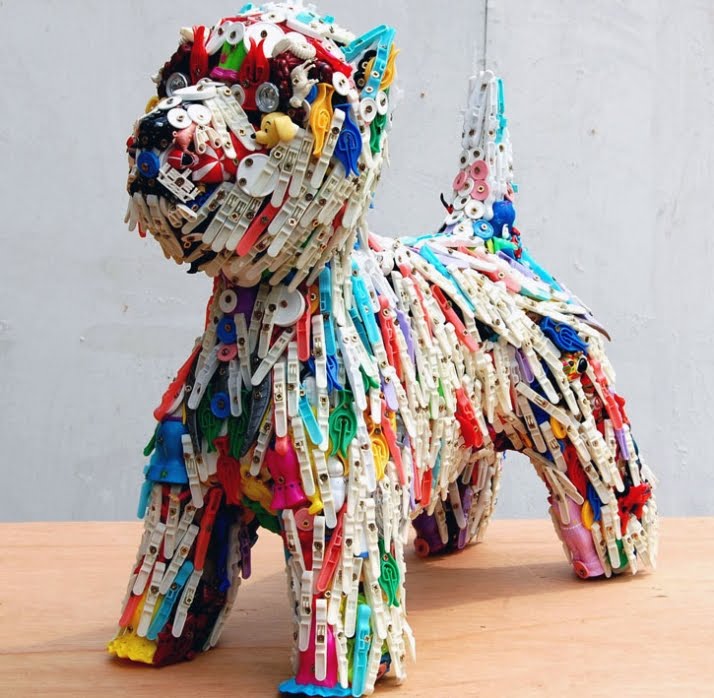 
Robert Bradford grew up in a fairly bland South London suburb and wanted to become an artist from a very young age.

He did his Foundation at Beckenham School of Art , his B.A. in painting at Ravensbourne College of Art in Kent and an M.A. in Film at the Royal College of Art, London.

After college for he worked as a mental health worker for several years in order to support his work (and not be dependent upon sales). At that time his work primarily focused on painting and drawing but also included experiments with film video and photography. He showed widely in Great Britain during this period exhibiting at the I.C.A,. London. Arnolfini Bristol and Richard Demarco Galleries Edinburgh amongst many others.

Whilst lecturing at Maidstone College Of Art he was offered visiting lectureship at San Diego State University in California U.S.A. where he then lived worked and exhibited for five years, and where he has pieces in many Public and Private Collections. His exhibitions
there include San Diego Museum of Art, Bernard Jacobson Gallery and Stella Polaris Gallery (both Los Angeles).

Upon his return to England Robert continued his interest in mental health and trained and practiced as a psychotherapist part time in London and Bristol whilst switching his art career to focus upon sculpture, initially in the area of public art. He began a series of more than 40 pyrotechnical fire sculptures and other interactive works, which continued through his most recent move to Cornwall in 2001 where he is well known for his five annual Beast Burnings on Bodmin Moor and for his large scale Bombus Bee built for the Eden Project in 2001/2.

In 2004 Robert began experimenting with a series of sculptures which utilise plastic toys as their main modelling material, and which have now attracted consistent international attention. After trials with two unsatisfactory construction methods, he began screwing the toys into wooden armatures, which proved both strong and highly adaptable as a method,

Works from this series have been showing in London Bristol and New York, can be seen in Paris Amsterdam London Flanders and Bangkok over the next months.


Robert has been resident in Cornwall for the past seven years, (where he is well known for his large ‘Bombus Bee’ sculpture at the Eden Project., and for his pyrotechnical fire sculptures on Bodmin Moor), amongst his more. permanent works.

He has exhibited widely and has work in public and private collections in England and America..

Robert work tends to follow groups of ideas in series’ in both 2D and 3D.

To quote Charles Jencks on Post Modernism. ...... (contemporary) “artists want to know how to represent variety with integrity. One strategy is to choose the right style for the job. A case of serial revivalism.A further tactic is to provide heterogenous materials and shapes in a language which is fresh and enigmatic.“

Much of Roberts work can be treated either as single pieces or can be grouped together to form larger 2D or 3D progressions / installations.

Ideas come from a wide variety of sources, and include :- psychotherapeutic concepts ( the artist practised as a therapist for several years). The culture and climate of the time. Physical experiments with matter and things... everything from fire to paint to objects to past and present aesthetics and styles. People and other species, synthetic and natural worlds.All materials are potential sculpture , they are dealt with in an non-hierarchical way.

For a long time now I have preferred to use materials that are not bland i.e. have some kind of history of weathering or use. One day about four years ago out in the studio I was looking into my childrens box of outgrown / discarded toys which happened to be stored in the same building and responded to the random collection of colours shapes and forms they made. I figured that if I could find a way of putting them together to constitute a larger form they would have great potential as larger scale sculpture.
Over the next while I experimented with two other construction methods (which both had their downsides) - before one day about a year ago in frustration I tried putting a screw through one toy and then many others. To my surprise most didn’t crack or shatter and the new series has been largely based around and developed from that fact.
Ideally the pieces will work on many levels. The toys themselves interest me in their own right as mini sculptures by unknown and uncredited artists. Mostly I use the toys abstractly as forms with which to build muscle bone or internal or external organs but all types of human pursuits can be referred to and represented through them - things loved or hated - things used and carried as tools etc etc. They provide interest in surface detail whilst making their contribution to the totalities. The toys also provide a moving history of fads and fashions as they pass through the media and our awareness temporarily significant and then forgotten.
Public reaction to the sculptures has been largely very positive (in some cases gleeful)- often children drag their parents to come and look at the pieces and then a whole sequence of recognition and recollection usually begins, naming the various toys and recalling the times and circumstances of their use. There is usually some fascination with the sculptures, the individual toys used and with the process of their acquisition and construction. Sometimes there is outright laughter. There is usually a whole process of going back and forth between looking at the sculptures as a totality and the individual parts from which they are made (which of course is my intention). Some people of course just say they are rubbish which of course is perfectly true! There is also often talk about consumerism waste and recycling, which whilst not being my central concern is also in my view positive when it occurs. Some find the sculptures beautiful/ curious/ scary/ weird/ emotional and etc. (which considering all they are really are , is bits of what is usually seen as trash) is great.
In a way the sculptures are also history pieces in the sense that you could date any one of them roughly speaking from the time that the last toy screwed on to the structure was produced. 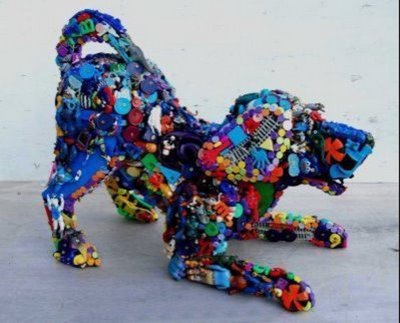 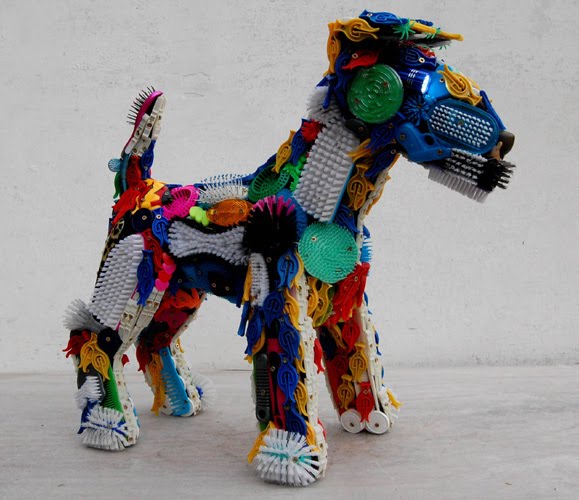 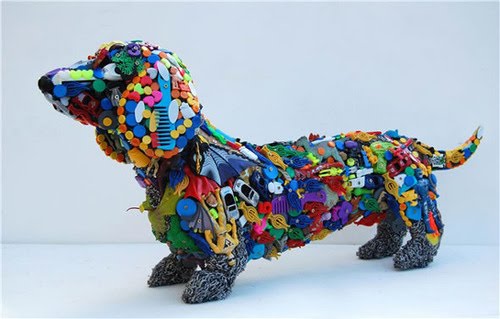 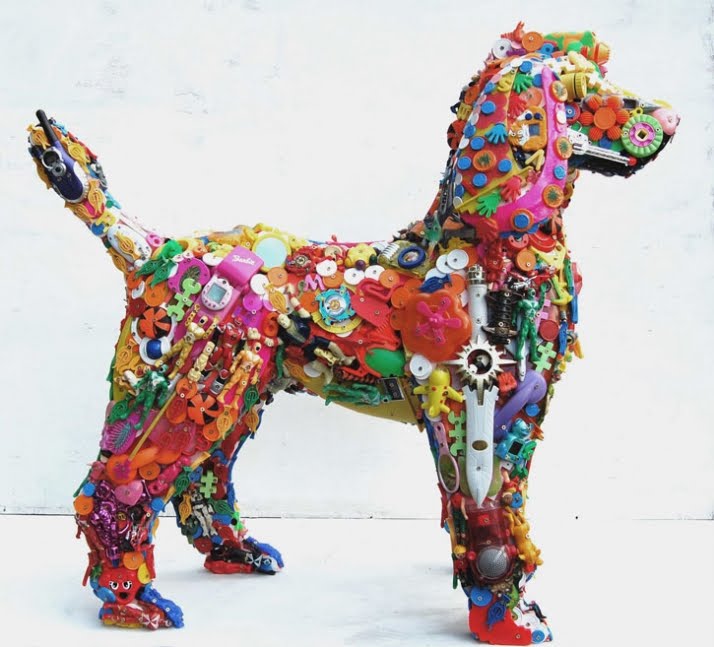