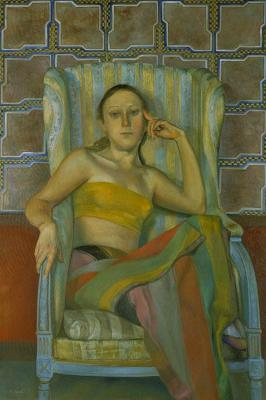 Richard Piccolo was born in 1943 in Hartford Connecticut, but has deep roots in Italy, and has made Italy his home since the early 1970's, with residences in Rome and Umbria, where he has renovated a farmhouse in the rolling hills of Umbertide. He received his BID from Pratt Institute, and studied at the Art Students League before receiving his MFA from Brooklyn College in 1968, where he studied with Alfred Russell, among others, and developed a lasting friendship with this seminal figure. Piccolo is a renowned expert on Italian engraving as well as a respected professor at the various University foreign study programs in Rome, and he was the director of the Pratt Institute Rome Program from 1978 to 1995. Richard Piccolo has progressed from "Carravagisti" realism in the 1970's towards a lighter, brighter palette, with more expressive brushwork in the tradition of the great Italian Baroque painters like Annibale Carracci, Luca Giordano and Giovanni Batista Tiepolo. Piccolo works in many genres, (his still life-in-landscape series of the late 70s were particularly interesting), and he has a history of public mural works. His recent monumental mural series of "The Four Elements" for the US Bank Plaza building in Sacramento, California, is a work on the scale of his beloved Italian Baroque artists. This series of allegorical landscapes depicting the effects of the four elements against a backdrop of the spectacular Sacramento area topography was begun in 1990 and completed in 1994. Piccolo worked on this monumental project entirely in his studios in Italy, using the sketches he made during trips to California as models. Aer was the first tryptych of the series, and in this work, Piccolo introduces the themes that are to tie the entire mural project together. In this allegorical composition, dominated by landscapes transformed by the play of wind and clouds, two independent figures are themselves experiencing the effects of the element Aer. In one, a boy blowing bubbles that gently float away into an idyllic Poussinesque distance, the other a young woman, leaning against a windblown tree, the folds of her skirt swirling in the wind as she looks away in reverie. The third of the triptych is a river landscape with a magnificent passenger balloon flying off into a dramatic golden sky. 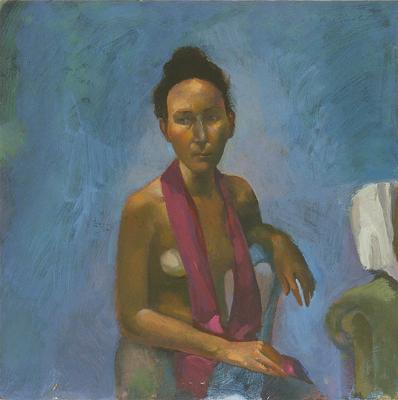 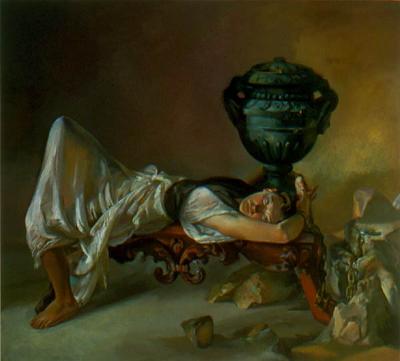 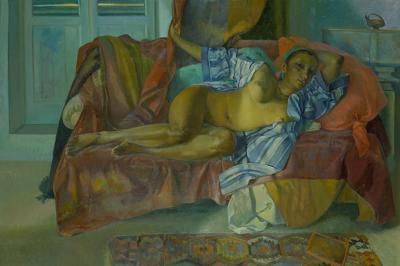 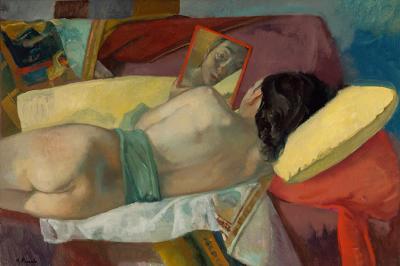