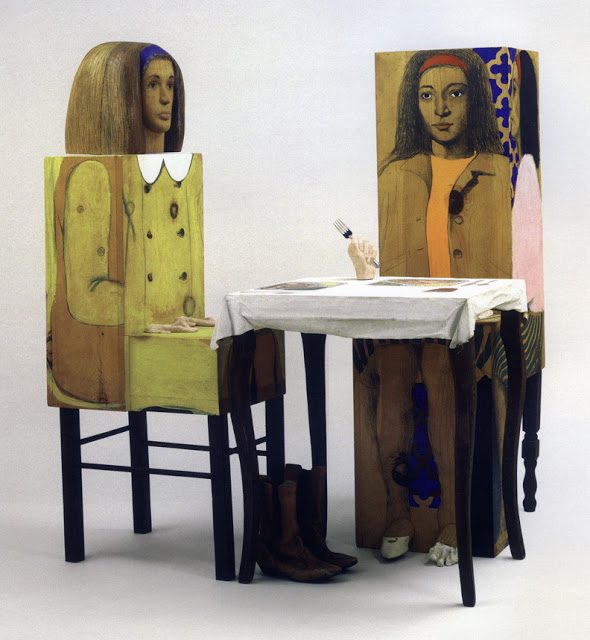 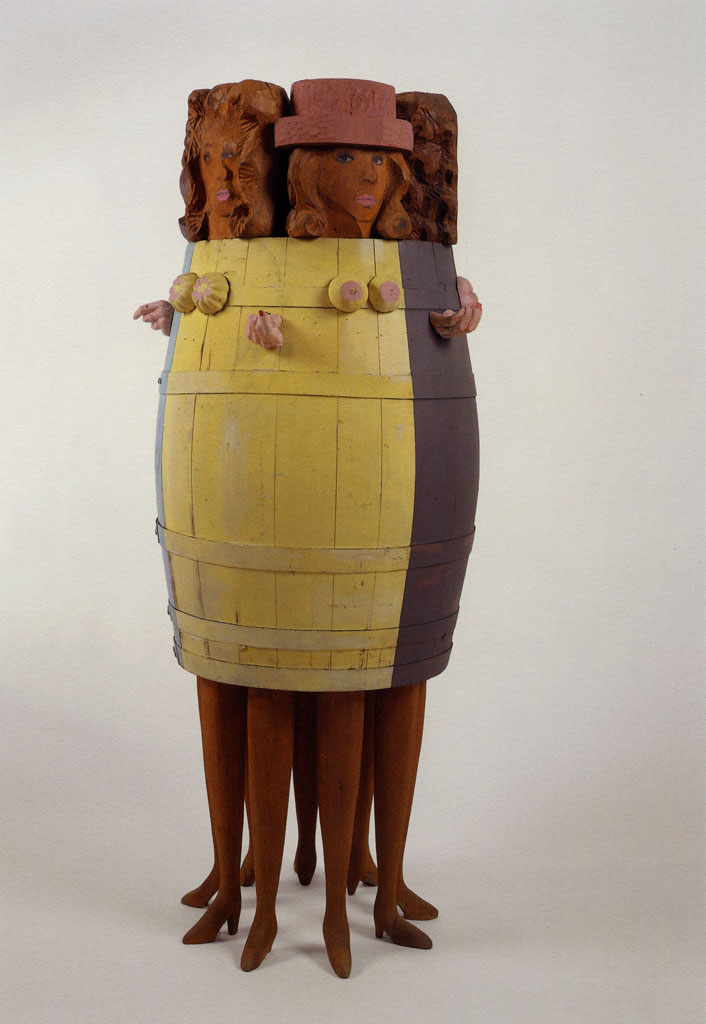 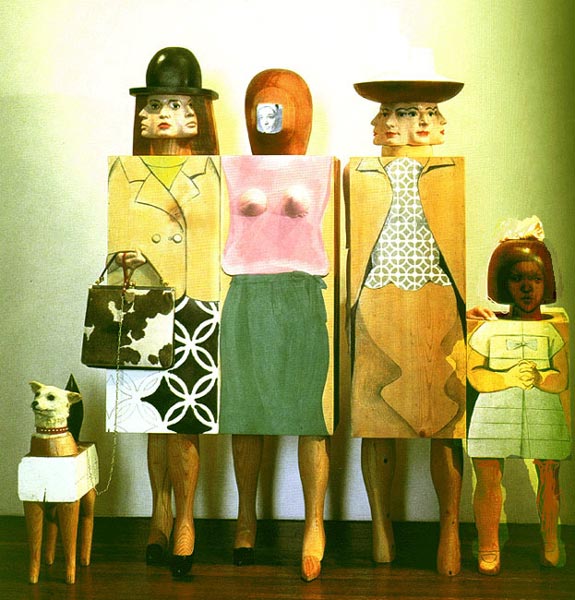 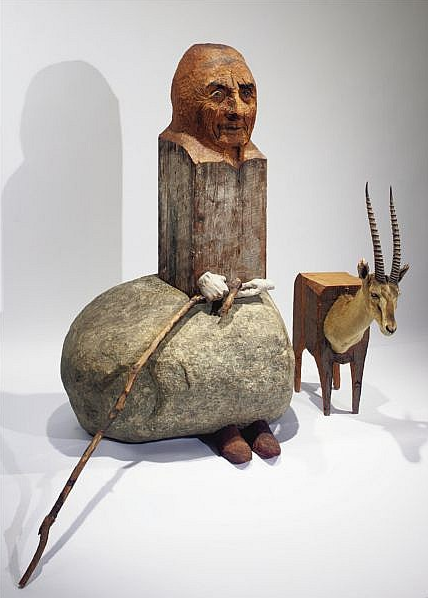 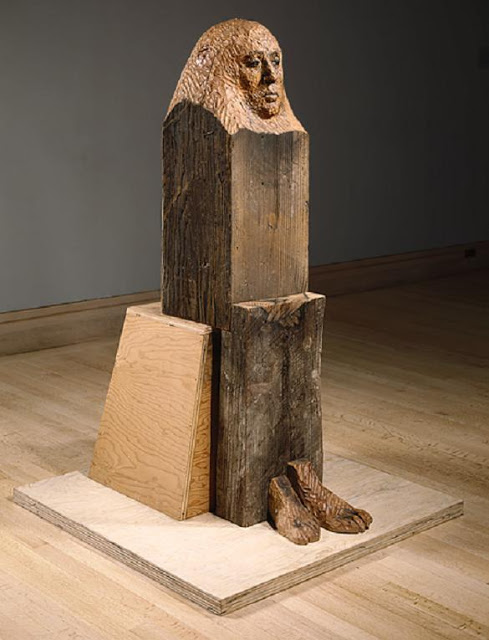 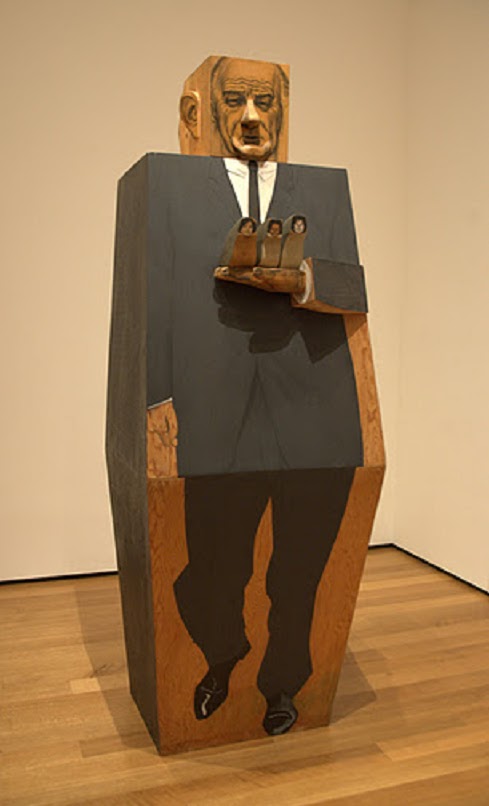 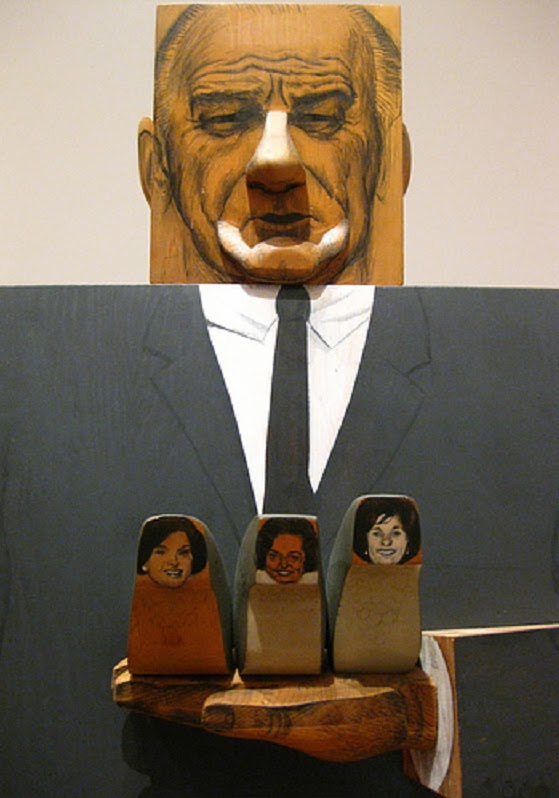 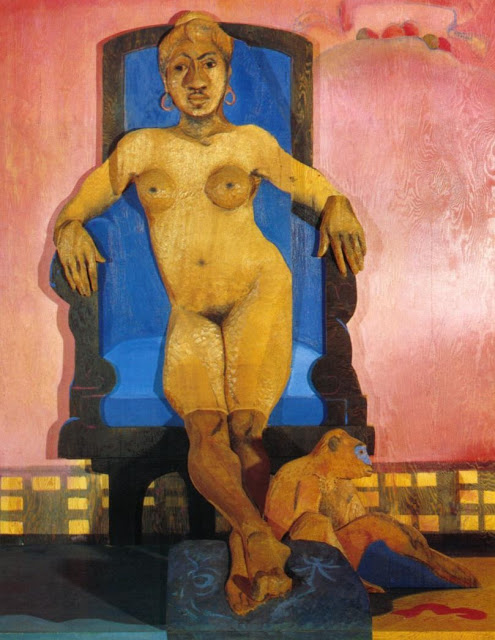 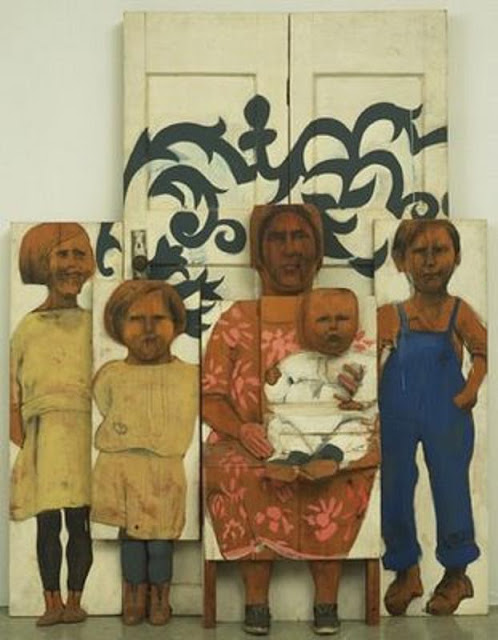 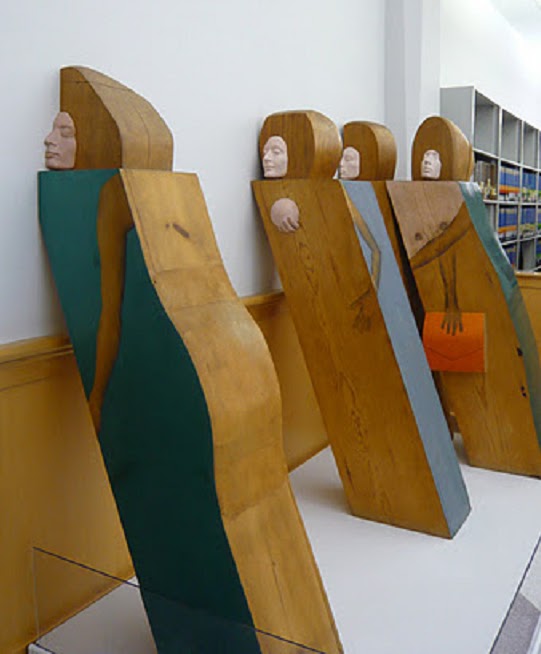 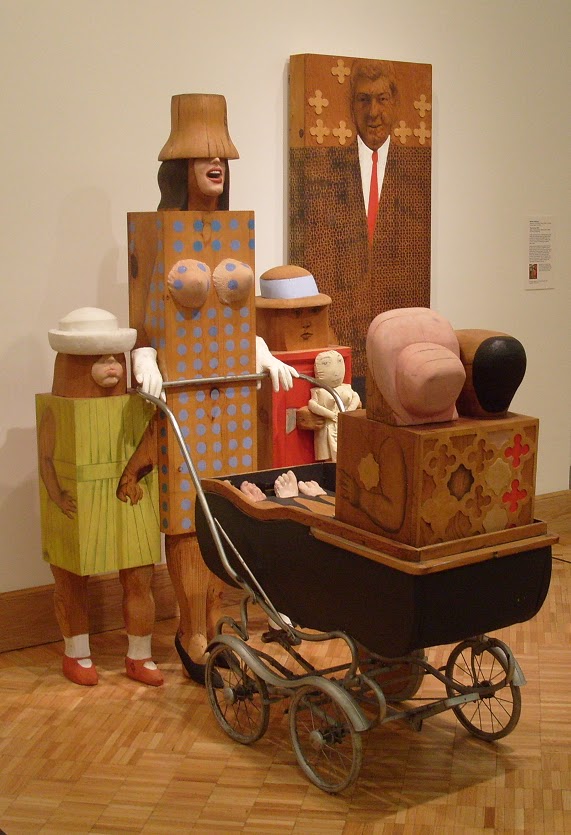 Maria Sol Escobar (born May 22, 1930), otherwise known simply as Marisol, is a sculptor born in Paris of Venezuelan lineage, living in Europe, the United States and Caracas.

er education consisted of study at Jepson Art Institute, École des Beaux-Arts, the Art Students League of New York, and she was a student of Hans Hofmann, and at the New School for Social Research. The pop art culture in the 1960s found Marisol as one of its members, enhancing her recognition and popularity. Marisol concentrates her work on three dimensional portraits, using inspiration “found in photographs or gleaned from personal memories” (Gardner, p. 15).
Marisol’s religious beliefs might very well have had a great deal of influence upon her tendencies toward and character for the arts. Her father moved Marisol, at age sixteen, and her brother (Gustavo Escobar) to Los Angeles after World War II and also their mother’s untimely death where Marisol began her study in the arts. She began practice in painting and drawing during her teen years. It was during these years she admitted self-inflicted acts of penance upon herself (Westmacott, p. 20 ). She walked on her knees until they bled, kept silent for long periods and tied ropes tightly around her waist in emulation of saints and martyrs.
It was Marisol’s father who reinforced her interest in art and supported Marisol in her decision to continue along its course. During her life Marisol's mother (Josefina Escobar) was a well known patron of the arts in Venezuela. Marisol studied in Paris, France in 1949, returning to study in New York in 1950. 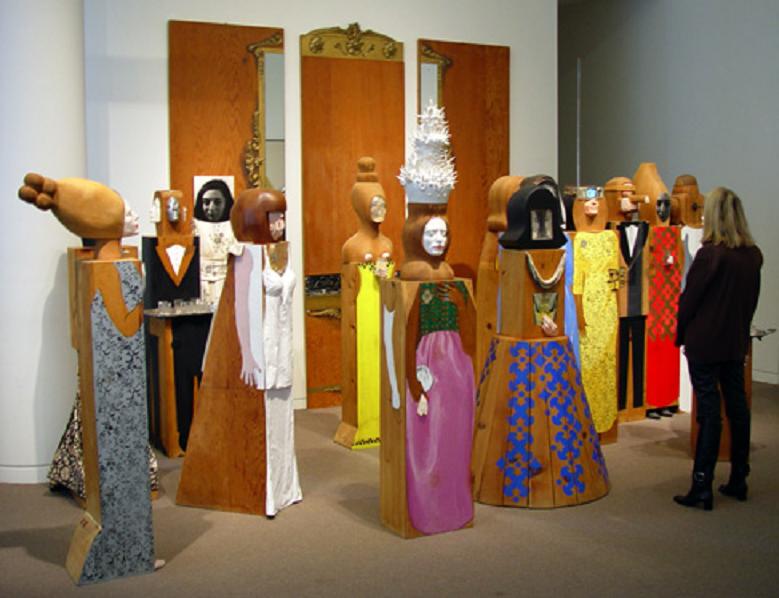 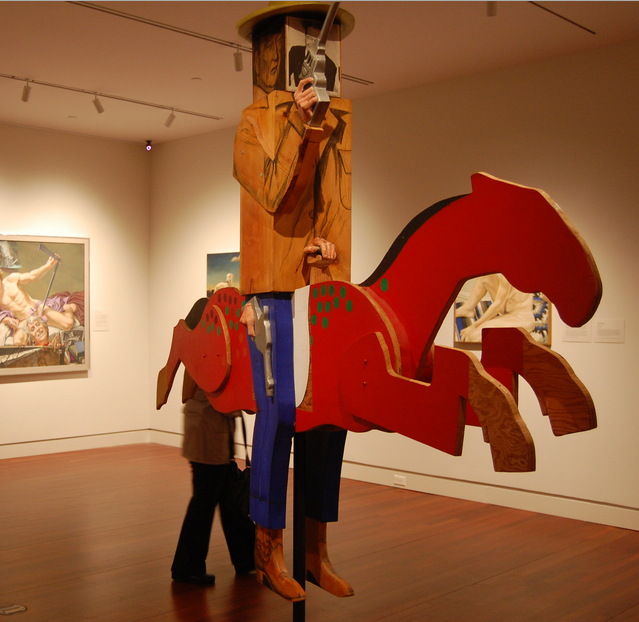 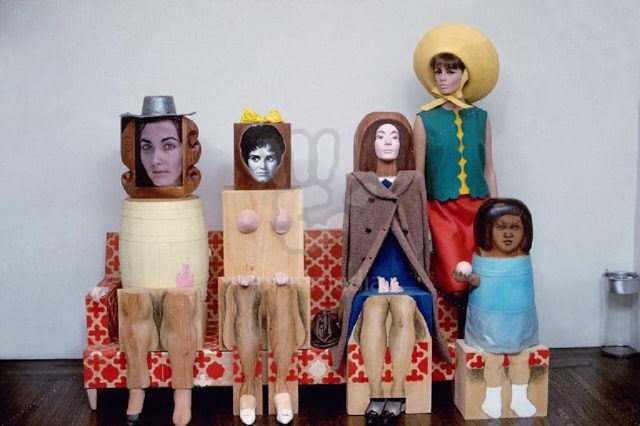 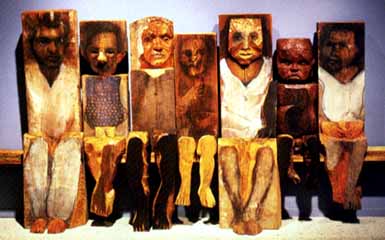 From 1951 to 1954 she took courses at the New School for Social Research while studying under her most influential mentor, the so-called ‘dean of Abstract Expressionism,’ Hans Hofmann. At Hofmann’s schools in Greenwich Village and Provincetown, Massachusetts, Marisol became acquainted with notions of the "push and pull" dynamic: of forcing dichotomies between raw and finished states. During this period, Marisol was introduced to New York's Cedar Tavern, the chief watering hole for many of the leading Abstract Expressionists with whom Marisol became friends, particularly Willem de Kooning.

It was in 1951, when Marisol discovered Pre-Columbian artifacts that she decided to give up painting and attend her focus to sculpture. Many of her paintings remain in the hands of friends and are rarely sold, making them difficult to appraise. Marisol’s inclination led her to work with terracotta and wood. She remained primarily self-taught, though having one clay course in a New York institution. Marisol’s first exhibition was in The Leo Castelli Gallery in New York in 1958 and it met with success. However, Marisol found herself plagued with self-doubt and ventured to analyze herself and her work as she moved abroad. She successfully freed her doubts and honed her skills (Westmacott, p. 23). Moving back to New York, she found a tremendous amount of success, culminating in her work finding home in a number of prestigious museums. Marisol sought to envelop herself in the area of abstract expressionism. “The heavy seriousness of this movement prompted Marisol to seek humor in her own work, which was essentially carved and drawn-on self-portraiture”(p. 24).

It was in the following decade of the 1960s that Marisol began to be influenced by pop artists such as Andy Warhol and Roy Lichtenstein. She even appeared in two movies by Andy Warhol, “The Kiss” and “13 Most Beautiful Girls” (“Escobar, Marisol.”). One of her best-known works from this period is The Party, a life-size group installation of figures at the Toledo Museum of Art. All the figures, gathered together in various guises of the social elite, sported Marisol’s face. It is intriguing to note that Marisol dropped her family surname of Escobar in order to divest herself of a patrilineal identity and to "stand out from the crowd." (“Escobar, Marisol.”)
Marisol drifted through many movements, though her style has always been unique. “‘Not Pop, Not Op, It’s Marisol!’ was the way Grace Glueck titled her article in the New York Times in 1965…”(Gardner, p.13). Silence has been an integral part of Marisol’s work and life. She speaks no more than she must and in her work she is said to give silence, “form and weight”. She speaks little of her career, once to have stated, "I have always been very fortunate. People like what I do"(Gardner, p. 14).
Marisol’s diversity, unique eye and character set her apart from any one school of thought. She has often included portraits of public figures, family members and friends in her sculpture. In one exhibit, “Marisol Escobar's ‘The Kennedys’ criticized the larger-than-life image of the family” (Walsh, 8). Marisol as well includes her interpretation of the suffering in the human condition in some of her artwork such as “Dust Bowl Migrants” and “Father Damien.” The latter sculpture is the centerpiece of the entrance to the Hawaii State Capitol and the Hawaii State Legislature in Honolulu. A second Father Damien Statue is displayed in the National Statuary Hall Collection in the United States Capitol. Her respect for Leonardo da Vinci led her to complete a sculptural representation of “The Last Supper” and “The Virgin with St. Anne” (Gardner, p. 12).

Marisol has received prestige and honor for her talent and unique voice and has had the opportunity to influence, fascinate and speak to viewers. She reflects her own reality and simply is who she is. She claims, “I was born an artist. Afterwards, I had to explain to everyone just what that meant” (Berman, p. 16). Marisol maintains an outward diffidence, foiling her inner stability. It is her eye for the detail, her definite perception, her clear sense of self and world that spools her creativity and gives birth to her creations. "She is an artist capable of creating both a wonderful parody of the macho ideal represented by John Wayne and a reverent homage to South African Bishop Desmond Tutu," notes Eleanor Heartney.
Marisol is a “sculptor of modern life.” She “evokes the venality of social climbers, the integrity of great artists, the contradictions of the powerful and the quiet dignity of dispossessed” (Berman, p. 14).
She has received awards including the 1997 Premio Gabriela Mistral from the Organization of American States for her contribution to Inter-American culture. She was elected to membership in the American Academy of Arts and Letters in 1978.
Marisol continues to work on new pieces. Her newest compositions tend to be, compared to her previous works, of a smaller scale but remain impressive and particular.
She lives in TriBeCa, in New York City. 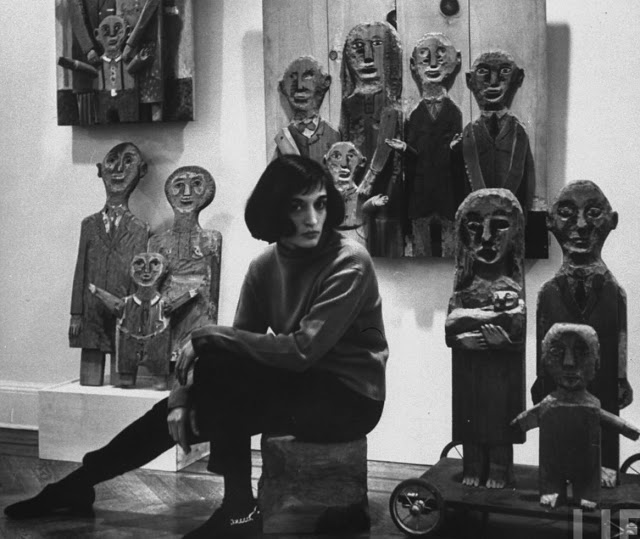